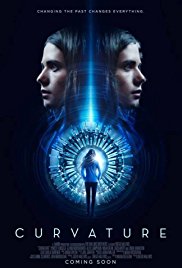 Helen is a robotics engineer who, at the start of the movie is found recovering from the tragic suicide of her engineering husband. She retreats to the family cabin only to find herself waking up on her couch in the city with amnesia. The amount of time she is missing in her memory matches with the experiments her husband was doing with time travel.

With the help of a concerned friend, Alex (Zack Avery), she starts retracing her steps to find out what happened.

Helen comes to understand she sent herself back in time to stop herself from killing her husband’s murder, his business and research partner Tomas (Glenn Morshower: Transformers: The Last Knight).

And the adventure begins.

The premise gives the movie a strong start. The acting is strong including the star power appearance of Linda Hamilton (The Terminator) as Florence, Helens Robotics advisor from her school days. The presence on the screen really shines and Diego Hallivis directs them into some stunning performances.

However, the story has some flaws that take away from the story. I noticed a couple of breaks in character and in the plot that made me step back some from the film. Which was a sad thing because I like what they were doing and where the story ended up.

The actors did what they could with the characters, and they did a great job. The flaws presented were in how the characters were written. It felt like there were changes made during production that didn’t get incorporated well.

This could very well be the case because I heard the filming of Linda Hamilton’s role had to be cut short because she had to leave the set to take care of personal matters.

Removing the minor flaws the story moves well. The scenes are well set and even though there is a very scientific look where it is needed, other parts, with the minor details in the background sets it in a current reality.

There is always a question of an ethical dilemma when time travel is concerned. This provides the basics that we’ve become used to. There is also an added subplot, developing an additional ethical dilemma, woven in throughout the film.

When we reach the end of the movie the separate plots are brought together nicely. Helen is brought full circle on herself. When she realizes what her true motive was, and, in a sense, is, it brought me back into the story.

Curvature has some mild language use, which would probably give it a PG-13 rating. There is nothing in it that would bring it close to an R.

Overall I found Curvature a really good movie giving it 3 ½ out 5.

I give the acting and directing 4 out of 5.

Curvature is still on the film festival circuit. If you like sci-fi thrillers, I think you will like Curvature for its twist on the general theme that has been used before.

Curvature is 91 minutes long and was produced in the United States.