Spoiler warning: this review contains minor spoilers from early in the movie. 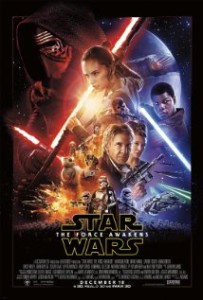 With the Disney/Lucasfilm hype machine running full bore pretty much all of 2015, the latest continuation of the Star Wars saga, Star Wars: The Force Awakens, opened in December to monstrous levels of expectation. Would it wash away lingering bad memories of a trio of disappointing prequels? Would director J.J. Abrams, coming off a controversial “reimagining” of Star Trek, be able to craft a Star Wars movie worthy of the iconic original trilogy? Would the new principal cast of Daisy Ridley, John Boyega, and Oscar Isaac rise to the challenge of carrying what is very likely to become the highest grossing movie ever? My answers, in order, are yes, for much of the first half, and absolutely.

The film opens on the desert planet Jakku (reminiscent of frequently visited Tatooine, far from the last callback to the originals), where ace pilot Poe Dameron (Isaac) has been dispatched by General Leia (Carrie Fisher) to search for traces of legendary Jedi warrior Luke Skywalker (Mark Hamill). Remnants of the villainous galactic Empire now known as the First Order capture Poe, but a stormtrooper shocked by their brutality springs the captured pilot, who dubs the trooper Finn (Boyega). On the run, Finn meets lonely scavenger Rey (Ridley), then a chance encounter with smugglers Han Solo (Harrison Ford) and Chewbacca (Peter Mayhew) puts the main plot into motion.

Abrams generally sets his films up well, and The Force Awakens is no exception, with the director deftly interweaving the introductions of new characters and old. He also captures the pacing of the original trilogy, a distinct failure of the prequels. Abrams’s film feels like Star Wars, probably also due in no small part to script work by original screenwriter Lawrence Kasdan. Unfortunately, this is also where the film goes wrong. Without giving too much away, The Force Awakens‘s plot borrows heavily from the originals, recycling story elements early and often. While some of this is inevitable fan service, one might begin to wonder if the new film plays things a bit too safe, particularly on repeat viewings. The originality of new character introductions makes the first half stronger than the second, and some overdone foreshadowing along with a rushed finale mute the impact of a key third act event.

A focus on practical effects over computer-generated visuals is very welcome, but where the film really shines is its new cast. While Harrison Ford gets significant screen time, Boyega, Isaac, and especially Ridley bring great energy to their roles. Isaac, the closest thing to a veteran of the three, gives Poe a great sense of swagger, and Boyega is quick and funny as fish-out-of-water stormtrooper Finn. However, Ridley is a discovery as Rey, strong and vulnerable at the same time, and a more than worthy successor to feisty Leia. She’s a bit raw, having very little film experience prior to the role, but her performance is a highlight.