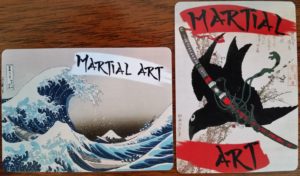 In Martial Art, the clans of Japan are assembling to determine which has rightful leadership. As your clan’s leader you must take charge and organize everyone for the upcoming battles. It is your decision of who should fight now and who should be held back for later battles. But, there is more than just sending your warriors forth into battle, you can work on building greater reserves or use treacherous twists to deceive.

Martial Art is the second game to come from Spider Goat Games (their first game was Gangster Dice—review from 2014). And Spider Goat Games is working to maintain the quality of an easy to learn, quick-play game.

Martial Art pits players against each other, battling for control of significant locations. The mechanic is one most people are very familiar with, the same mechanic as in the card game War. However, Martial Art includes hand management, bluffing, and conditional effects that occur depending on the land being fought over, and the cards being played.

Each turn the players battle for a place (as identified on the land card). Some of the lands have effects that come into play alter events, like for Sagami, “After the battle, the player with the lowest strength may take a card from the discard pile, including those this round.” And, some of the battle cards also effect play.

Two of us sat down at the table to learn Martial Art. The rules are easy to learn and we were able to start playing quickly. Because the mechanics of the game are something we understood, the only thing causing us to slow down at all was reading the conditional effects to decide if we wanted to use the particular card that round.

Once the land card was revealed, we saw if it had any effect on the battle. Then we selected our battle cards, deciding if there were any we could, and wanted to play, prior to the battle, and which card we wanted to bring into the battle directly. There is also an option of “forgoing” the battle to create a larger hand to choose from later. The cards are placed face down, that is the bluffing part; each player decides their action without knowing what the other players are attempting.

Once the cards are revealed the battle is concluded and any after battle effects are completed. Once one player has achieved a victory condition based on the land cards, the game ends. In our games we never ran completely through the deck.

Since this is a straightforward card game, it plays quickly. We were able to get several games played while we were filling in the time waiting for others of our gaming group. Set up and clean up are also quick. Since you are working with a pack of cards (or 2 for playing the 3-4 player variation), they are easy to have packed away in the game bag, backpack, or suitcase to have ready for a quick game anywhere.

The artwork on the cards is wonderful. While finishing up, the art work was enough to get other players interested in wanting to learn the game.

Spider Goat Games is bringing another good game to have handy for the spare moments you want to fill. They are starting a Kickstarter campaign in the month of June 2016.

Thanks to Spider Goat Games for a copy of the prototype for review.