Mythica: A Quest for Heroes [Review] 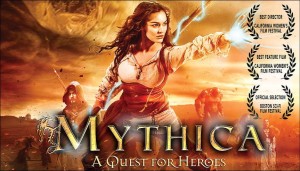 (Editor’s Note:  While the editors of Utah Geek Magazine do not necessarily agree or disagree with this review, we do believe the movie is well worth watching, and we believe in supporting our local filmmakers.  Watch it for free on ConTV.)

Arrowstorm Entertainment describes itself as a production company dedicated to producing fantasy and science fiction films for fans, by fans. Mythica: A Quest for Heroes, produced by Arrowstorm and directed by Anne K. Black, is clearly a labor of love for the filmmakers. Compared to major studio efforts like The Lord of the Rings trilogy, the budget constraints are apparent, but Black and her crew do commendable work in placing the film within the friendly confines of high fantasy, including magic stones, orcs, and dark caverns. The adventure even begins inside an appropriately rowdy and dangerous tavern. It is a shame the film does not attempt to break these confines.

Mythica tells the story of Marek (Melanie Stone), club-footed slave to a cruel master. Limited physically, she is quick to learn magic from Gojun Pye (Kevin Sorbo), a local wizard who has taken interest in her and her talent. When Pye decides to leave, he encourages Marek to escape slavery, telling her of the aforementioned tavern and the possibility of a life of adventure. There, she meets Teela (Nicola Posener (no relation to the Masters of the Universe Teela)), a priestess whose temple has been, predictably, raided, leaving her sister in the hands of a monstrous ogre. Marek puts together a party of adventurers to help Teela, including former soldier Thane (Adam Johnson) and pointed-eared thief Dagen (Jake Stormoen). 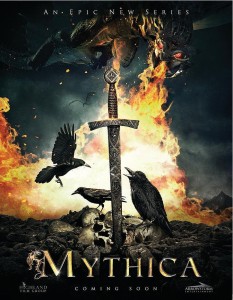 Sound familiar? It should, at least for fans of tabletop or computer roleplaying games. This avid Dungeons & Dragons player found himself speculating on the characters and monsters depicted in the film, debating which lined up with the archetypal characters and monsters of the grandfather of fantasy games. Unfortunately, as has often been observed, it is more interesting to play games than to watch games being played, and Mythica lives well within the limits of fantasy game pastiche. Films and games are different media, with different demands, and the wasteland of video game adaptations provides more than ample evidence that direct translation of game to film is doomed. Ultimately, Mythica fails as a film by failing to take on the challenges of film.

All this being said, Mythica does demonstrate the ability of digital filmmakers to bring films outside the mainstream to screens other than theaters. The script by director Black, Jason Faller, and Kynan Griffin ambitiously calls for a multitude of locations and action setpieces, and Black does a surprisingly good job of realizing these with a very limited budget. The largely digital effects and costumes are not bad, and Stone is appealingly sympathetic as Marek, the rare fantasy heroine with character beyond sex appeal. Mythica is the first film in a planned trilogy, and there are some glimmers of better things to come, even if not from the current trilogy.   UGeek Rating: 3/10