Thor: Ragnarok is the latest in the series of movies released from Marvel. In this movie the God of Thunder is front and center again as the storyline of the infinity stones is carried forward across the vast Marvel universe. Over the past movies people have been giving up on the Marvel story being told because it was becoming weak in the telling. Thor: Ragnarok shifts back to a stronger storyline and tells the story in a fun, compelling manner.

Credit should be given on many levels to those involved in the production.

The feel of the movie has changed from some of the recent installments and part of that goes to bringing on Taiki Waititi as director. Waititi is probably best known for his mocumentary What We Do in the Shadows. He brings his comedic ability timing to the new Thor installment. This was an element that worked in the earlier movies which was lost.

From the open sequence of Thor: Ragnarok you know this movie is set differently with its comic element. Of course there was humor in the other Marvel movies, but in Ragnarok the comedy feels like it’s happening from a natural place without the forced setup that has become so popular in so many movies. I was grateful that there wasn’t the whole “we are going to tell you a joke,” then “here’s the joke,” followed by “did you get the joke?”

Instead, the humor is allowed to play out from the characters. This adds to the flow of the scenes, instead of taking away from them. There are different levels of humor throughout, but none is ever particularly called out to the audience allowing everyone to enjoy it at their level.

Interactions between the actors were relaxed. It really looked like everyone was into the characters and having fun doing what they do so well. In some of the recent Marvel releases this feeling was missing. Yes, I know the topics were more involved with serious issues taking place, but they are still in the Marvel comic universe. And, when there is a tension between the actors it comes across as a more rigid performance. This movie was fluid.

The comic relief of the movie allows the storyline to continue without overpowering it. There are even times when you are expecting the joke because of earlier setup and it isn’t given. Which gave a greater effect because it didn’t break the tension, which we have seen in recent installments. For me some of the best lines came from the sideline characters just being allowed to be themselves.

Here we have Helmsworth, Hiddleston, and Goldblum playing off scenes that were improvisation. Their interaction is perfect. Unless I had saw the interview with Goldblum telling that they were playing off-the-cuff I wouldn’t have known it. From other work we have had a glimpse at Helmsworth’s and Hiddleston’s comic ability, In Ragnarok Waititi sets up his actors (and not just this trio) with the ability to play in a universe where we all want to play around a bit.

Thor: Ragnarok is still a super-hero action movie. It gets back in touch with so many of the elements earlier comic hero movies were for me, fun. There are still the fights and special effects. In Ragnarok it felt like the fight scenes were trimmed down. I didn’t time them, so I am not sure. But, I didn’t get to the point of saying, “Got it, can we move on now?”

The overarching story taking place through the series of movies is here. We learn in the very beginning Thor has made an effort to find the infinity stones. Thor meets Dr Strange, and we are introduced to just how much he has grown since our last meeting. We are given the timeline of events in subtle ways to let us know everything is still moving.

All of this is done with superb writing. There are a few points where we dip into backstory. And, when we do, it is not poured out on top of us, but given in tasty bites to build what is happening. 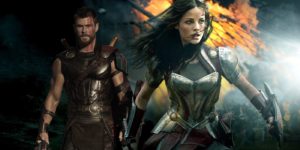 I mentioned earlier how the actors seemed to have the fun interplay. This also applies to how the actors were portraying their parts. There was more depth to the characters. Our leads are back from earlier movies and they keep true to who they were. We also get more depth from them know, a greater understanding of their motivations.

It takes a great villain to make these movies work and we get one in Hela played by Cate Blanchett. The writing of the character gives us a backstory to why Hela is who she is and why she is doing what she is doing. Blanchett takes Hela to a level of villainy that shows how bad she is with intelligence. There is reason to have empathy and sympathy for this character. you might not want to be there with her at that level, but at the very least you have an understanding that she is doing what she considers to be the right thing to be doing.

Even the new characters have stronger feeling about them. We are given a lot more depth to the characters that aren’t even going to be carried forward in the story. Background action taking place in the scenes and the short lines delivered provide fuller characters who propel the story at a better pace. Even in the moments of narrative, the characterizations kept the action, suspense, plot, and intrigue moving.

I’ve been told you have to set the theme of a movie early on and carry it through to the end. Success. Where all of the other things keep the Thor: Ragnarok working on the level of entertainment. The themes in the movie are going to keep people talking about this one more than what I have heard in conversation about the recent movies of this storyline.

The writers (Eric Pearson, Craig Kyle, and Christopher Yost based on the comics created by Stan Lee, Larry Lieber, and Jack Kirby) make a promise at the beginning of the movie and they deliver the goods throughout—right to the end. (Speaking of which, there are two end scenes, one mid credits, and one at the end of the credits—after all this time I was shocked to see people leaving the theater when the credits started rolling).

Waititi took the writing and prepared, with the efforts of the rest involved, an enjoyable visual sensation.

This is one of the best, if not the best, Marvel movies. The settings bring a greater feel of the original works. The cinematography was grand. The directing worked with the talent of the actors to allow the individual influences to show through. Timing was superb.

It would help to have seen the earlier movies, but they are not required. This is a self-contained chapter.

I give Thor: Ragnarok