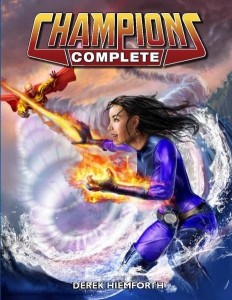 Around 30 years ago the role-playing game (RPG) Champions was introduced. As the name suggests it was a system focused on playing superheroes. Like other RPGs that have been around for such a long time, it has gone through revisions. And, it has developed into the HERO System (currently the rules are in their sixth edition). Although the rules system has developed into is a generic character creation system, allowing for broader play into different genres, it still has maintained its original focus of playing superheroes.

Hero Games was gracious in providing three of their genre books to Utah Geek Magazine and Guild Master Gaming for review. Each is being reviewed separately, to ensure I am dealing with specifics of each one, and not make anyone read a genre they are not interested in. Before writing this first review I will say I enjoyed going through all three books (did a quick pass first looking for similarities) and my gaming group has expressed their desire to play all of them. Here is the first.

In keeping with its roots, the first book is for the superhero genre. The comic book worlds, galaxies, and the universe are open to you. You can play at any level you desire, from heroes who are average people working to make a difference, to the ultra-powerful superheroes shooting back and forth between time and space saving the day from the galactic supervillains.

This 240 page book provides everything needed (thus Complete) to play the game. Just over half of the book is devoted to building characters—player characters (PCs) and non-player characters (NPCs). The rest covers information needed for running encounters to campaigns.

Character creation in the HERO System is done on a point buy. The heroic standard (elite agents) are on about a 175 point base while standard superheroes (important superheroes) are along the lines of 400 points. In comparison an average skilled to competent individual would be 50–100 points. There is guidance for adjusting these bases to create a feel for the game you and your players want to create. The point buy system also allows each player to make the character they want, from their favorite comic book heroes or their own creations.

This system allows you to customize your character. You are not tied to a specific class, instead, you develop the skills and abilities best suiting your character, your play, your universe. All of your abilities, skills, powers, and possibly equipment are created through the point buy. It does mean there is a little more time investment at the start.

If this is your first time working with the HERO System and the way it allows you to adjust your character, it will take you more time than you are probably used to investing during character creation. But, for most RPG players, the ability to create uniqueness for your character outweighs the time.

One of the main reasons it takes longer to start a new character is that in the HERO System skills, talents, spells, etc. are based on “generic” concepts you adjust to fit to your desire. Instead of having the abilities predefined like a fire jet or a water jet, these would be built in the same manner and the visual affect, or how the damage is dealt, is left up to how the player want to define it. This gives creativity the forefront on the development of the character. For beginners, I suggest building some lower point characters, then some talents, powers, and so forth to get an understanding of how the point system works. There are examples to help in understanding the process and after a few times you will find it easier. These same aspects also apply to character advancement.

Being a point based system means characters are not acquiring new pre-specified attributes as they go up in levels based on a specified class. As your character earns additional points you can develop traits specific to the character and what the character has gone through. Advancement is usually slower (remember though, a 400 point character is already really advanced) than systems where you can race through the lower levels. I have seen that some players used to level systems have a harder time with this advancement because their character don’t “ding.”

The next sections of the book deal with game mechanics. These sections deal with equipment, movement, combat, basically the rules governing how your character can interact with the world, non-player characters (NPCs), and other player characters. Some of this information applies to any genre, but here are also specifics for Champions.

There is a section dedicated to information for roleplaying superheroes. This includes subsections like “Living in a Comic Book World.” There is information on what makes the superhero genre a superhero genre and how to apply it to your game. There are also a number of suggestions for different themes, settings, plots, and subplots. This section is open for everyone to read, but for a game master (GM) this is the area to use for defining the game you want to run.

Examples are placed throughout the book to help you. There are examples of champions and villains, and a lot of different types of NPCs you can meet. They also provide examples of building traits, powers, and equipment. You don’t need to create everything on your own though, there is enough base material to get you started. As you play, you can learn and develop your world for the direction you want your game to go.

This is a complete book for playing Champions. Enough to get started and run a full on campaign, you really don’t need to buy another book to play a game. It is also a good starting point for diving into a full-on superhero game you can expand easily with the additional material available.

The Champions Complete is available in soft cover and PDF (suggested retail of $40). It is written by Derek Hiemforth.

There are groups who are experienced in the HERO system. Just check the information at local game stores and on-line. If you are looking for players, please share some information here so gamers can get together and play.

Thanks again to Hero Games for the review copy.