Shadowrun and the Runner’s Toolkit Reviewed

Looking for a cross-over of cyberpunk and fantasy? The leader in the genre is most likely Shadowrun. This role-playing game (RPG) has been around for years and has slipped in and out of favor in the general populace, but has maintained a strong core following. Recently the 20th Anniversary Core Rulebook (Fourth Edition) of Shadowrun along with additional support material was released. The release of new material has expanded the game back into the mainstream and once again is going strong.

I played Shadowrun about 15 years ago and found the setting unique and enjoyable. The new releases keep the same feel of the original game and have bumped out the timeline to accommodate the changes in reality, and in the game setting. You are in the near future, about 50 years out, and because of event in the world the fantasy races have come back through human de-evolution (the authors do a much better job of telling how that happens than I could here). This means there are elves, dwarves, and orcs among other races. Magic has also made a resurgence. Now, overlay those elements with the ability to do body modifications through computer implants and other bio-enhancements along with a much more extensive internet. There is the basic setting.

The overarching society is also a cyberpunk staple, the controlling power is money. Corporations are some of the strongest groups, but there are still governments and laws to be dealt with. Other groups are also vying for power—some powerful in technology, others in magic, and other in the group following they have been able to create.

Into this mix drops the characters, shadow runners—operatives working in the gray areas of society, walking the razors edge between law and corruption. They do the things the corporations, governments, secret societies, or individuals want done, but want plausible deniability in case anything goes wrong. Shadow runners are the ones performing the jobs that could get a person thrown into jail, or get killed. Success usually means a healthy payday.

Characters for Shadowrun are created on a point build system. With no classes, this leaves the development of the characters open to whatever/whoever you want to create. You can pull from cyberpunk basics like a street samurai, or net hacker, or build a character more specific to the game like a shaman or technomancer. Or, characters we are more used to like weapon specialists or gang members. To make things easier in building characters the Runner’s Toolkit provides a number of kits a player can mix-and-match to design the character’s abilities, skills, and equipment.

If you are interested in what you have read so far, allow me to go into more detail on the two items I picked up at a local game shop. 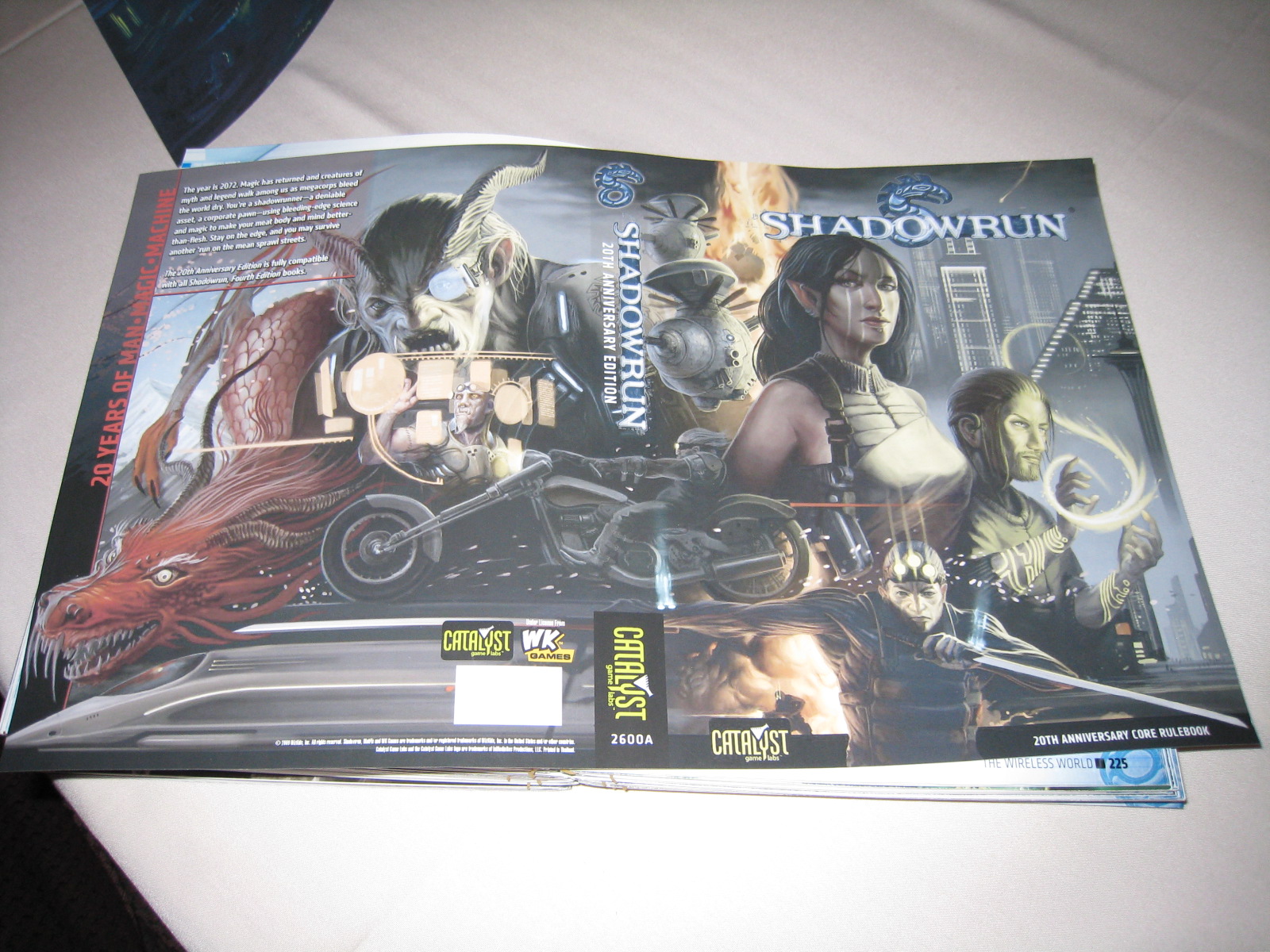 This is a 375 page, hard-bound, standard sized game book. The book contains all the information needed to start as a player, or a game master (GM). Yes, there is a lot more material you can purchase to build a Shadowrun game library, however, the basics are here for those who want to grab ahold of the idea and run with it.

There is an overall flow to the book in presenting information. The book begins with an introduction to the game world and concepts. This leads into character creation and then into information needed for GMing. In reading through the book I didn’t find any of the material that should be GM eyes only. I liked I could read through the book and get acquainted without having to concern myself with skipping sections that should be restricted to a GM who is running a game. I also like how the system doesn’t require the players to master the rules before being able to develop and play a character. The major areas of the book are broken down into sections, or chapters, but they are not numbered, just titled.

Each section of the book begins with a piece of short fiction. I found this to be a great way of getting the feel of the game world along with providing understanding for the information being presented. These stories might take a couple of pages, but they are fun and well worth the read (i.e., the section for creating characters is led by the story Fresh Meat by Jennifer Harding).

The book is full of tables for referencing during setup and game play. The coloration of the tables makes them stand out on the page. Along with the tables, there are examples and sidebars to help understand how the game mechanics work and feel. There is a well-structured table of contents at the front of the book and an extensive index at the back covering this and five other reference books. In the back is also an index of tables. These make information quick and easy to reference.

The artwork, like the stories, present a good feel for the game world you are immersing yourself into, along with giving some understanding of the game mechanics being presented.

The Runner’s Toolkit is a collection of material for starting and enhancing your Shadowrun game. There are five books (two designed for starting new players, two for reference, and an introductory adventure). One book references a set of maps that can be used in-game. There are also tabletop reference sheets, a GM screen, and a poster.

Anatomy of a Shadowrun (30 pages) is the first book. This book presents a Shadowrun adventure in a two-column format. One side presents the story in narrative, while the other side details the game mechanics used in that portion of the story. This story presentation gives a view of how the characters, encounters, setting, and storyline all come together. The game mechanics gives an understanding of how the game is played by explaining the mechanics involved, rules references, and resolution of skill challenges.

PACKS Pre-Generated Auxiliary Character Kit System (28 pages) is the next book. Because character generation is a point based system, there are a lot of options presented to players. For some players, too many options may lead to stagnation, feeling overwhelmed, and never starting. PACKS deals with this by having premade kits with the point cost listed. It walks you through developing a character by determining your abilities, race, skills, gear, and the finishing touches (such as contacts and starting money). This system of kits was easy to follow and has flexibility to allow for just about any type of character you might come up with. This is a good way for creating characters with new players, and for creating non-player characters.

Compiled Tables for Arsenal, Augmentation, Street Magic, and Unwired (48 pages) is what the title claims. This is a compilation of information for easy reference. If you are looking for an item for a character to use, this gives the stats and the references for further information. I do not have the books referenced, so I was unable to compare any of the information. However, there seems to be enough information for use during play without having to look up every description.

Contacts, Adventures, Sprawl Sites (32 pages) is a reference for ideas. Who is the party going to need to contact, or run against, what is the run about, and where does it take place are the main elements of any adventure in a role-playing game. Here is a reference set up particularly for the Shadowrun world. The sprawl sites in this book are also provided as 4 double-sided, full-color, laminated maps that can be used during game play.

On The Run is the last book, which is an adventure. I am not going to go into the details of the adventure, except to say this 56 page booklet is designed to bring new characters into the game, but still provide a challenge for those who have already experienced the game.

These books are all printed in black and white with a staple binding. When I first looked at them I thought they were not as high of quality of the other materials I had been looking at. Step away from the no color and staples and you have some quality work put together to allow for a decent price. Just like the core book, these are done with high quality paper and printing. Where artwork is used it is done well.

There are six, double-sided, full color, quick reference sheets. These are great for use during play. Each one covers a specific area of game play, like Ranged Combat. There is a box of vital statistics providing the basics of the topic covered. If needed, there is another box covering specific information for the topic. Then there is a walkthrough box with numbered steps to help get through the specified activity. These help in learning the system, and even later.

The final item is a four-panel GM screen. The screen provides quick reference material for the game master and an area where they can hide information from the players as needed. This is one of the best made GM screens I have ever come across. In other game systems, I have worn out screens because of the material used. This screen is made from heavier material and it looks, and feels, like it was designed to withstand being carried in a pack with the books, dice, and other gaming implements back and forth to many gaming sessions.

Shadowrun 20th Anniversary Core Rulebook and Shadowrun Runner’s Toolkit are from Catalyst Game Labs. They are high quality materials, both in the content and in the presentation. The core rulebook lists for $44.99 and the toolkit for $39.99.

If you are wanting to step out of the dungeon, into a future world of shadows, but still play your elf, take a look at what Shadowrun has to offer.